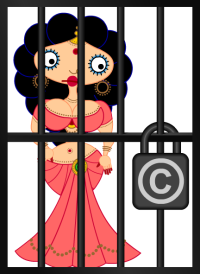 Last year Scrabblette and I went to the Brisbane International Film Festival and saw an animated movie called Sita Sings the Blues. It's an animated movie combining part of the Ramayana and some '20s American jazz music. Strangely, it works brilliantly. However the author has a problem - although the recording of the jazz is out of copyright, the arrangement is not. I don't even know what an arrangement is. But before Sita can be released, the author has to pay $50,000 in copyright fees. That would be easy enough, with half the world on the "no copyright, free content, information wants to be free" bandwagon, but of course hardly anyone has heard of the movie. So far the effort at questioncopyright.org has only raised 15% of the required money.

After I donated my small amount, I received a copy of the movie in the mail. The author is going to release it for free download when she's allowed to. You can help! Make your donation, watch the movie, and tell everyone how great it is!
Posted by Friendless at 3:37 pm No comments: 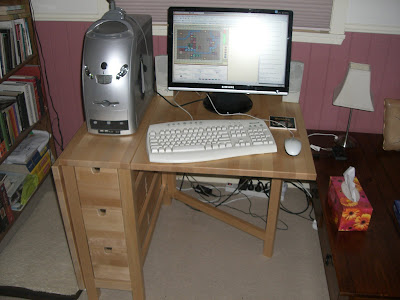 The legendary Melissa celebrated her birthday yesterday. Wouldn't she have loved to get a Norden gateleg table OMGLIKE I DID! I only got it because my study kinda sucks - it's too hot in summer, too cold in winter, and too far from the rest of the house, which means I've been using the dining room table as my study for a couple of months. Scrabblette wants to use the dining room table for her study, so we had to find somewhere else for the computer to do. It disturbs me a little that I have a new table and its primary purpose is not to play games on - what am I turning into?

BTW, for anyone considering purchasing one of these from IKEA, here are some interesting facts. They weight 42kg, and aren't on wheels, so they're not as portable as you might think. The screws are made of a really soft metal so I had to screw 31 of them in by hand, which gave me blisters. The assembly took me about an hour I suppose, and wasn't very hard if you've done as much IKEA stuff as I have.
Posted by Friendless at 2:30 pm No comments:

My Game Room: A Video Tour

Here's a video tour of my game room. It's no Academy Award winner, as I was learning how to use the camera and it was early in the morning. But, it might be enough to make you jealous.

Posted by Friendless at 5:55 pm No comments:

In response to Todd D.'s question above, we're using version IV of Glory to Rome. Which we did again tonight. This time we used the building powers, and although the game took longer this time we played with the full deck, so we got the proper experience. We were also a whole lot more savvy - we were wary of putting valuable stuff into the pool, and played more jokers and so on.

In our first game, I won because I had a lot of builders. I think I might have even had a builder client. I had some good stuff in my stockpile and squirreled it away and got good points that way. In the second game that was never going to work.

I started rather poorly I thought - building a purple building and a blue building. With so much work to do, I invested in Architect and Craftsman clients. When I finally finished one of those buildings it gave me the special power that any leader or follower cards I played went into my stockpile... which was pretty sweet. I also made a building that allowed me to play a card from my hand into my stockpile when I was Labourer. So I had a steady stream of cards going into my stockpile, and the clients to build with, so I just needed to crank that machine to get some good building done. One of the things I built was a Statue (+3 VP), so I ended the game on 17VP.

The Evil Count had a good machine going, with Architects and Craftsmen as well, whom he could also press-gang into Labour. As he was sitting to my right I had no hope of working a Labourer strategy, so the direct stockpile feeding worked nicely. CyberKev had a sweet building which gave him the benefit of marble buildings before he completed building them, so he started a lot of those. I couldn't see what Ozvortex was doing so well, as he was down the other end of the table... I think he had a Labourer client as well, which took away some of the Evil Count's advantage.

Anyway, I had no great strategy other than described above, but I realised that I was ahead on points and should try to end the game, so I did. I'd considered leading Merchant, but the Evil Count had a wicked combo which would have gamed him at least 6 points, and I think CyberKev and Ozvortex would have benefitted a lot as well, so it's lucky I didn't.

I do like Glory to Rome, but the building powers change the game quite dramatically. The Evil Count's building which gave him effectively 2 or 3 free Labourer clients meant we just couldn't put anything into the pool. CyberKev had special powers for all of his marble buildings and so had a hand size of 11. I felt completely underpowered - all I could do was build buildings. I like the effect of buildings in Puerto Rico, where they have a power but it's not so blatantly strong. Sure the hacienda gives you more guys, but its other subtle effect is to make the game end faster. The small market is not so great, but the few times you use it it's sweet. Glory to Rome's buildings tend to hit the game with a hammer.

In the end though, we liked it and will play it again.
Posted by Friendless at 11:44 pm 2 comments:

I recently got excited and bought Conflict of Heroes Awakening the Bear - a game about the Eastern Front in WW2. I was hoping it was a heavier version of Memoir '44, which I love. Instead it's a lighter version of ASL, which is not so bad but not as good as I'd hoped.

I've only played ASL SK1, only Scenario 1 at that, but I'll try to compare them. The things that are missing from ASL include: leaders, the CRT, rules about carrying machine guns, counter exhaustion, and all of the fire phases. Leaders are abstracted away as Command Action Points - action points you can use to do whatever you want. The CRT is replaced by a random chit draw, and the chits remind me very much of the results from the CRT in ASL, but they say on them what the effect is rather than me having to remember. The fire phases are replaced by a very clever action-reaction system which I guess I'll have to describe.

The game takes place over a number of rounds - 5 in the first scenario. Each round consists of a number of player turns. On a player's turn he may activate up to 1 unit and receives 7 action points (APs) to use with that unit. APs can be used to move, fire, rally, whatever. Throughout his turn the player takes a number of actions which can be: expend APs (on the activated unit), expend CAPs (on any unit, even those which have run out of APs), play a card, or take an opportunity action. An opportunity action is where you take an unactivated unit and do one (any) action with it, and it loses its chance for activation later in the round. So to use an unactivated unit you have two options - use CAPs, which run out, or use an opportunity action which prevents activation later.

Anyway, after each of the player's actions, the opponent has a chance to take an action in response. As the opponent has no activated unit, he can't use APs, he can only use CAPs, cards, or opportunity actions. These moves are non-optimal use of resources, but sometimes necessary. For example, if it's your turn and you try to run your guys across a field in front of my machine gun, I will use CAPs to shoot at you. Or, if you turn your tank on my machine gun emplacement, I will use an opportunity action to move them into the forest out of your line of sight. If you can force me to use my CAPs and opportunity actions on defence, there'll be fewer action points I can use on offence.

When you choose to do no more actions on your turn, the turn marker passes to me and I can now do as many actions as I like, but again I can only activate one unit (to get APs) on my turn. Other units can be used, but they need to be powered by CAPs or OAs. We alternate taking turns until both of us in succession choose to use no action points on a turn - either because we're exhausted, or it's tactically wise. Then the next round starts, and all units get refreshed (so they can become activated again), we get our CAPs back, and we dice for initiative. Once you understand how it works it's pretty sweet.

The physical components of the game are very very nice. The map boards are like those from ASL except they're heavy enough to double as tank armour. The chits are chunky and attractive. The cards... OK, I don't like the artwork on the cards so much, but physically they're fine. The rule book is kinda big - don't try to read it on a crowded bus - but it gets its message across (caveat: I'm only up to the part where it says "now play scenario 2"). The box is a bit flimsy, and mine was damaged before it got to me. If only they'd taken lessons from the guys who made the C&C Ancients box.

In play (I've only played the first scenario) the game feels similar to ASL. Gun emplacements control a large space, so you need to avoid them. This provokes tactics like sneaking towards the objective under cover of forest so you can get to a position with a good view. Roads are not as powerful in CoH - roads are exactly equivalent to open fields as far as I can tell, so the ASL strategy of controlling the road is not as effective. I'll have to play more to get a better feel, but I'm sure with CoH I'll get to tanks much sooner than I ever will with ASL SK, because that will probably be never.

Overall, I'm quite impressed. I could still go for something a little simpler, but I do appreciate the strength of the simulation compared to the complexity of the rules. Memoir is a great game but it is practical for infantry to run across in front of a tank without being scared, and that's maybe not so realistic. Conflict of Heroes gives much of the ASL feel, with only a fraction of the complexity.
Posted by Friendless at 6:43 am 4 comments: