Goodness me, I'm up bright and early in this New Year! That would be because although we saw the year in trying to avoid black riders and escape from the Shire, we discovered at about 12:15am that we really had no idea which way it was to Bucklebury and my teammate decided he'd strike out across Brisbane to his own warm hobbit hole instead.

Although I don't post here much any more, I do have this tradition of analysing the state of play of my game collection at the start of each year. Here are the previous years' articles:

Since I'm somewhat alert this year I'll also do a bit of a retrospective. The year started (as it often does) with On the Beach and Cancon. OtB is great because it exposes me to a lot of new games, and Cancon is great because I pick up a lot of new games there - mostly from the maths trade, but I do buy some - and that game debt decides what I'll be playing for the next few months. At Cancon 2013 I was playing Agents of SMERSH that I'd got from Kickstarter. That one didn't last long - there was no situation in which I would not rather play Tales of the Arabian Nights, so I passed it on to someone who wanted it more than I did.

Filler hits early in the year included Martin Wallace's The Hobbit Card Game (which I really like) and Timeline. Timeline pretty much continued throughout the year, and I now have 4 sets.

In March I put in an order at philibertnet.com, a French on-line games shop. That was the only way to get some things I wanted like Hanabi, the Yggdrasil Asgard expansion, and the Peloponnes Goat expansion. That order arrived just in time for Easter holidays, which was very convenient. We went away with one of my sisters, and played the RPG Fiasco a couple of times. Now that's a great game for people who aren't big on rules.

The middle of the year was spent playing off the game debt until the mid-year maths trade came along and helped me get rid of some stuff. However about that time I was doing some research into RPG-themed story-telling board games. That's the sort of game (e.g. Runebound) that I like to solo and would like to invent myself. That led to a lot of acquisitions, some P&P stuff from Artscow, the Doctor Who Solitaire Story Game, the Lone Wolf and Cub Game, and various others (most recently, Arkham Investigator).
However during that research I noticed that there was a Pathfinder card game coming out, and that was clearly relevant, so I decided I'd get a copy if I ever saw it in the shops.

Well... that kinda changed the year. The Pathfinder Adventure Card Game took solitaire gamers around the world by storm. It's not the best story-telling game, but within the limitations of the genre it does a very good job. Paizo has done a great job on it - great components, great support, and new adventures every month. I played it 46 times, so it's my game of the year.

In September by friend The Famous Game Designer Peter Hawes released his best game yet, Francis Drake. This is a game I have considerable emotional investment in, as Peter mentions me as one of the people wanting him to design something other than an area majority game. He's done a superb job. The game plays well, the components are wonderful, and it makes me excited to see that Peter can design games other than ones where people eat me / steal from me / chop off my head / generally annoy the crap out of me. That's not to say that Francis Drake is a hold hands and sing kinda game, it's just that the aggression is passive, and that's how I like it.

The end of the year was defined by a trip to Montréal with my wife. We flew into Boston just as the Red Sox were playing in the World Series, and as I'd taken advantage of the trip to get a copy of Strat-o-Matic Baseball from Amazon, I got a bit caught up in the moment. The downside is that I really don't know much about baseball. I also got Strat-o-matic Baseball Express, which I have played. I'm building up to the real thing.

I can't let the year go by without mentioning the Solitaire Games on Your Table geeklists. The 1 Player Guild on BGG, initially based around fractaloon's podcast (which I don't listen to, I don't listen to any podcasts) has really taken off, and every month there are geeklist items for loads of games that people are playing solitaire. The COIN games like Andean Abyss are very popular, but I don't think I have the concentration for those and the other very complex games. I did get sucked into Navajo Wars though. I've been to Arizona and have seen some of that country. However as I was visiting as an employee of the mining industry I was really more in Silverton country than Diné territory. Learning more about Navajo Wars is something I'm looking forward to this year.

OK, back to the numbers.

I'm a little bit disappointed that the numbers have deteriorated like that! Although I managed to play a lot of what I acquired, many didn't get played very much and distressingly quite a few didn't get played at all. I am including there 4 mini expansions, which may never get played. There are also 10 Lord of the Rings LCG expansions which are unplayed, and 4 which have been played only once. I've just started playing that game again, so I hope to see that situation improve. Hmm, I should list some of my games on the maths trade... or just dump them. 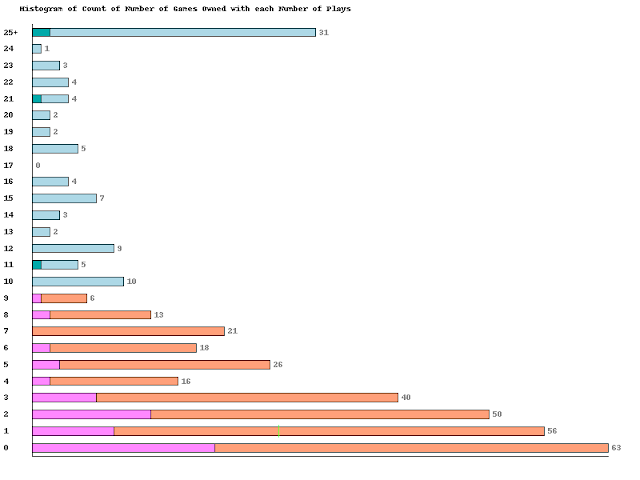 The graph is prettier this year! The different colours at the start of each row indicate expansions - you can see where a lot of my problem is coming from! I have a hard core of unplayed games which I've collected, mostly from India. Some of them are pretty much unplayably bad, but some I should take a look at. However at games night, they just don't compare to Francis Drake.

Oh well, I'm off to give myself a spanking until I cry and promise to do better this year.
Posted by Friendless at 11:18 am No comments: