The moment I saw it I was entranced by Terraliptar's photo of this game on BGG. When Gord eventually decided to make some more copies, I got him to send me one. I didn't realise it wasn't going to be exactly like Terraliptar's customised copy, so Scrabblette and I fixed it up by painting the domes and putting it in a proper box. So now, my copy is just like the one in the photo.

Scrabblette and I played a couple of times, but it's one amongst many many games I own that are underplayed. Consequently, when I headed out with the kid on Sunday afternoon, to a location where there would potentially be gamers, I took it along. The planned worked out excellently - Darryl the gamer had come along and offered to sit in one of the comfy chairs and play games with me (notice stern scowl from kid who knows everything). 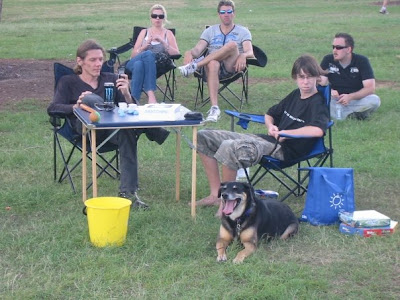 I hadn't played for a year or more, so we muddled through the first game with Darryl knowing much more about the rules than I did. Eventually I spotted a winning fork and won the game. For beginners, a fork is when you have the option of two good moves and your opponent can't prevent both.

Darryl then suggested we use the God Powers, which had never really interested me. I drew Hermes - "you may move two steps each turn", and Darryl drew "if you place a dome you can play a turn with your opponent's piece". Darryl had the good sense to set up a lot of places where he could place domes, so when I moved two spaces and set up a threat, he'd play a dome, move me somewhere stupid, and destroy the threat. I managed to win that game by setting up a threat that took two steps to get to, and blocking Darryl's access to the place where he could build a dome.

In Santorini one is always trying to get away from the opponent and set up a winning move before the opponent comes stomping in his muddy boots and puts a dome on your plan. On a 5x5 board, getting away is quite a challenge - often I would use a threat to coerce one of the opponent's men to go somewhere awkward. Pushing was another option! Sadly in the third game Darryl set up a winning fork that I didn't see coming, and beat me.

That was all the gaming for the day. When a storm suddenly hit the park we ran for the car as fast as we could and still got saturated. Anyway, Santorini is a great game, and it's a crying shame that someone like Gigamic hasn't produced it yet.
Posted by Friendless at 3:43 pm No comments: