Nickels and Dimes and Hits of the Year

These are games I played 5 or more times in 2010: Dominion: Seaside, Tales of the Arabian Nights, Tobago, Zendo, Avalam Bitaka, San Juan, Africa, Antike, Gonzaga, Jaipur, Lord of the Rings

Hits of the Year

The year was sadly characterised by me going to gaming feeling pretty worn out and not feeling like explaining rules. Consequently I played a lot of easier games, and other people's games (particularly AJ's), because the other people have to teach them. I don't know whether this is a fitness problem, an age problem, or an enthusiasm problem, but it prevented me playing things like Java or Key Harvest.

Blue Max - this is not really my sort of game, but my good buddy The Evil Count von Walduck built an implementation of it on his site, hexcellgames.com, so I played it quite a few times. However it didn't maintain my interest. If you do like that sort of game, go to the site and join up.

Peloponnes - This is very much my sort of game, because I play it solo :-). At about 15 minutes a game, you can experiment to see what effect different strategies have. I hope I keep playing it.

Start Player - No really, we played this. In fact we had a Start Player tournament. It was pretty silly.

Tales of the Arabian Nights I bought this at AGE in January, because Scrabblette is an Arabian Nights fanatic and I wanted to show it to her. I don't think it's as random as people say, and I try to play to win.I much prefer it with three players, as everybody's always involved and it doesn't go too long.

San Juan It's good to see at least one old favourite hitting the table, probably because I've given it as a gift so there's often a copy around. I've recovered from my malaise after writing a computer version of it, and I'm keen to play. I won a couple of games with violet building and monument strategy, whose effectiveness surprised me.

Antike I played this once a couple of years ago, and really liked the theme and thought the game was probably OK, so I acquired it in a trade. What a good idea! It's almost a war game, in that you can fight if you want to, but it's more the threat of combat that plays a part than actual carnage. Otherwise the strategy is to figure out where the easy VPs are (and are going to be) and play to get them. Eventually I started telling people that I always won with a gold strategy so that they'd take some of those points and make me think about something else.

Gonzaga I just love games with maps of Europe, particularly historical ones, and this game has weird plastic bits, so I had to have it. I quite like it - I'm a little bit hesitant because it's the sort of game where you can be randomly screwed over without warning, and that can cost you a lot.

Lord of the Rings This is one of AJ's games (which I have my own copy of). Every time I play it I'm reimpressed by how awesomely Knizia captured the themes of the book. Also, I usually win.

Attila (4 plays) Even better than a map of Europe is a Dark Ages map of Europe, so I had to have this. I finally got it in a trade, or I bought it from someone on the 'geek or something. It's not one of my favourites, but I do enjoy playing it anyway. I just can't get into my head how I can play well, and I don't remember whether I've won at all. But, I'll play any game with Visigoths.

Big City (4 plays) Another game that really talks to me, and also which I rarely win. I can't believe I've only played 4 times, I feel like I've lost at it about 10 times. Nevertheless, the bits are great, it plays superbly, and I feel like I can do stuff even if it's not scoring points.

Caylus Magna Carta (4 plays) I really really did not like Caylus, but I gave this as a gift once and when we played it I discovered there were nice rules without the provost, and I liked that a lot better. This is another game where I feel like I know what I'm doing, execute my plan, then discover that I've lost badly. Oh well.

Deduce or Die (4 plays) This is one of the best deduction games, and CyberKev managed to convince the Evil Count to implement a version of it at Hexcell, so I've played it on-line a couple of times. I hope to play more next year.

Rootword (4 plays) CyberKev felt the urge to acquire all of the games by Carl Chudyk, the Glory to Rome guy. This is a simple but odd word game, where you can steal other people's words at the risk that they may no longer be able to become words. Eventually he CyberKev sold his copy to me, so I can try it on Scrabblette.

Phoenicia (3 plays) Finally, another of AJ's games, included here because I really enjoy it and for a change, do quite well at it. I don't typically like auction games, but this one has the option to spend your money on something else which is just as good. I pretty much like the theme, understand the different paths to victory, and can handle the timing, so it's generally a positive experience.
Posted by Friendless at 11:50 am 2 comments:

Nickels and Dimes and Hits of the Year

These are games I played 5 or more times in 2010: Dominion: Seaside, Tales of the Arabian Nights, Tobago, Zendo, Avalam Bitaka, San Juan, Africa, Antike, Gonzaga, HJaipur, Lord of the Rings

Hits of the Year

Blue Max - this is not really my sort of game, but my good buddy The Evil Count von Walduck built an implementation of it on his site, hexcellgames.com, so I played it quite a few times. However it didn't maintain my interest.

Peloponnes - This is very much my sort of game, because I play it solo :-). At about 15 minutes a game, you can experiment to see what effect different strategies have. I hope I keep playing it.

Start Player - No really, we played this. In fact we had a Start

It's that time of the year again, when I look back on the previous year's gaming and am dismayed by the number of new games I bought and did not play, and the games that I have and love and haven't been played for years. This is the fourth time I've done this, here are the previous articles for reference (mine, if not yours):

I currently have 424 games in my collection. Last year I had 425, woohoo! I've acquired a few, so I must have got rid of some as well. Oh that's right, the RSPCA Store in New Farm got a couple of loads.

Your average rating for this collection is 7.07.

On average you have played each of these games 7.11 times.

Your Continuous Friendless Metric is 3.39 which corresponds to an average utilisation of 54.24%. 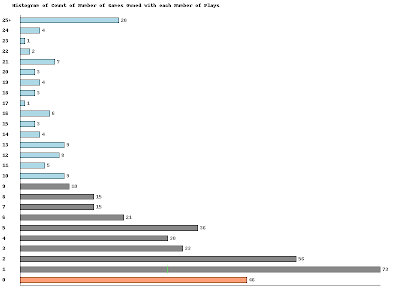 It seems 2010 was generally a year of consolidation, rather than accumulation, which is a nice change. Next I need to consolidate further to games that I actually play. This is a matter of some urgency, as the games no longer fit on the shelves in the game room.

I dropped to 493 plays last year, the lowest since I really got into the hobby. I have to admit, learning French has taken up a lot of that time, it's a very time-intensive pursuit. The amount of gaming I do at home has continued to decrease :-(. My goals for the new year are to continue down this path, with maybe even a decrease in the number of games I own. They seem to breed.
Posted by Friendless at 11:11 am No comments: